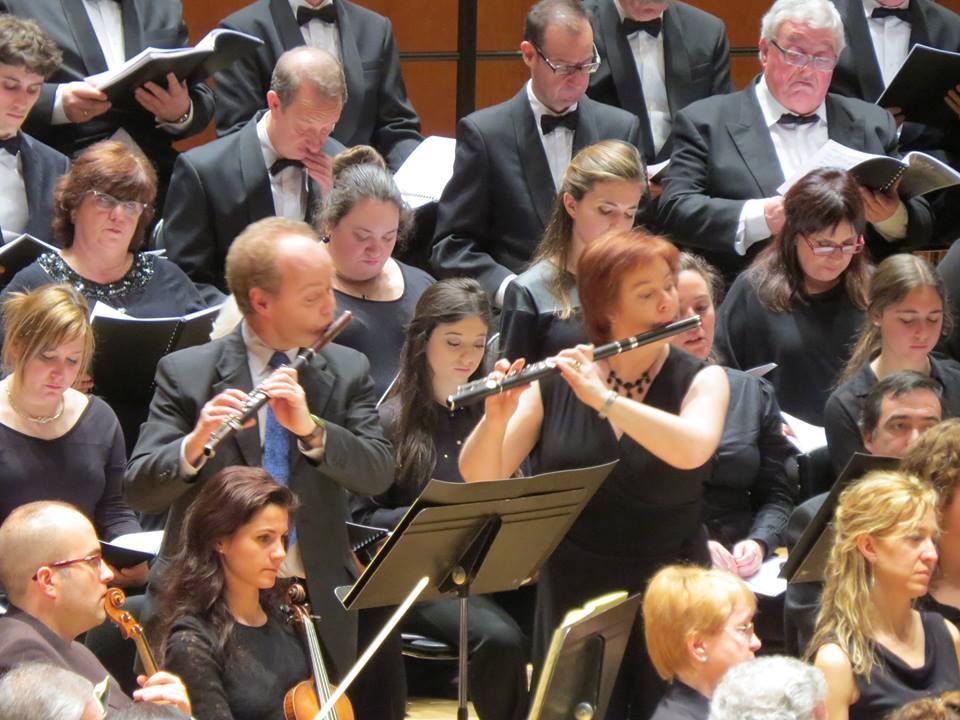 This week we have again another “flutistic” married couple. The first one were Isabel Souto and Christian Farroni, but now we have here Myra and Peter Pearse, both flutists in the Asturias Symphony Orchestra (OSPA). Discover all about this couple full of flute. I hope you like it! Enjoy it! 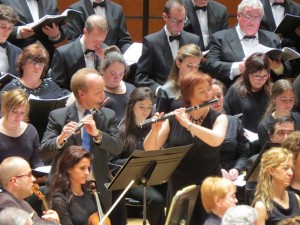 Myra:  My Mum and Dad are music lovers. There was always jazz and traditional celtic music playing in our house and in the car when we were driving places. When I was 7 we moved from Britain (my parents are Scottish) to Minnesota, and my musical education began there at the local primary school. I had a friend who was a year older than I and was learning the clarinet in the band programme. I remember not being very patient about waiting until I was in 4th grade and allowed to choose an instrument. When the time came and the school sent home the parental permission slip, I asked for the clarinet! However, my parents weren’t very keen on that instrument. They really thought that the fiddle, a very popular instrument in my Dad’s home, the Shetland Islands, would be ideal. Unfortunately, there are no fiddles/violins in a band programme, so they asked if I liked the sound of the flute.  I said “yes” and fell in love with it. My first three years were with the woodwind teacher, who was a clarinetist. When I was in my last year at primary school he told my parents to find me a private flute teacher because I loved it so much. I was very lucky to join a wonderful youth orchestra organisation when I was in the second year of middle school, the Greater Twin Cities Youth Symphonies. There were 8 orchestras ranging in age from primary school through the last year of high school. Entrance was through very competitive yearly auditions and the conductors were wonderful music educators. 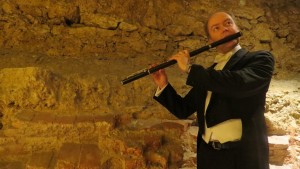 Peter:  Before my Dad was conscripted into the RAF (air force) he was very active as a singer so the house was also always full of music. I started learning the piano when I was very young, but remember watching a TV programme with James Galway and absolutely fell in love with the flute. A couple of years later, I started secondary school and that’s where I finally started to have flute lessons. I was given a flute on a Friday and I went back on Monday playing Annie’s Song and some scales which I had worked out and never looked back.

Peter: Apart from both ending up working in the same orchestra? The way I actually landed the job here in Asturias was like something from a surrealist novel.  Having completed my studies with WIBB and Sebastian Bell in the RAM in London, I then followed Myra to Indiana University in Bloomington (we met in London when she came over to study at the Guildhall for a year). I spent a wonderful year and a half there with Peter Lloyd and Kate Lukas.

Meanwhile, my recently retired parents were sailing around the Bay of Biscay and the French coast and had organised a series of friends to consult the Daily Telegraph for any adverts about European orchestral auditions. This was before internet! Every week somebody checked the job vacancies, apart from one week, when my parents had recently returned to the UK. My Mum realised what had happened and started asking her neighbours if anyone had bought the previous day’s newspaper. Somebody had, but the page with the ad for the Asturian orchestra showed up wrapped around half a dozen mackerel heads! Once it had been dried out and the fish peeled off, they phoned me about the audition which was to be held, among other places, in Amsterdam in June of 1993. This was just two months before our wedding in Shetland. I won the job and the phone call to Myra was one of the most memorable calls I have ever made! 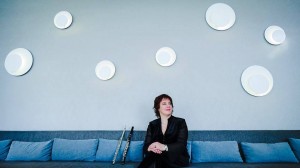 Myra: Yes, I will never forget it! I had just finished my MMus at IU and we had returned to my parent’s home Minnesota and were, rather anxiously, trying to figure out what we were going to do in order to afford airfares to all the auditions we were expecting to have to take. Peter and I had made an agreement to go wherever in the world whichever one of us were to win an orchestral position! It was quite a big dream! Peter had been doing auditions while at IU on the Artist’s Diploma course. He had been a finalist for the co-principal flute position in Barcelona and also did well in San Antonio, Texas. My first real audition was for the Hong Kong Philharmonic in Chicago. They had already selected a flute player from the UK and were asking all the tutti passages from Daphnis and Chlöe just to see who was brave enough to attempt them! Scary stuff, I remember, and an awfully dead acoustic (the hotel’s conference room with curtains and wall to wall carpeting), they could hear all the defects. Needless to say, it definitely inspired me to pay attention to everything in the parts!

Everybody asks us this question! Of course, we do have the advantage of being able to help each other with the technical aspects of playing, and Myra has her own flute repairman at home! When we left Indiana University, Peter Lloyd and Kate Lukas told us to keep our critical ears tuned to each other! We really worked together a lot with audition preparation and were brutally honest with each other. The whole business of “I could play that better…” doesn’t exist for us. We’re a team, a section whose concern is to present the music in the best way possible. We’re not a pair of flute players trying to outplay each other. Sometimes we study together and we always prepare orchestral parts together, but life is pretty frenetic right now, we have to just practice when we have a moment!

Our son Magnus is 16 and our daughter, Fiona, 13 years old. Magnus plays the piano, and has sung in the Oviedo opera season. He could be studying at the local conservatory, but we feel that the time needed to fulfil the course requirements would detract from his piano practice.  It’s very different from the music education that we had, where the focus was on instrumental and group playing. Magnus really enjoys his piano, but wants to be a scientist. He has his private piano teacher, and has had great success in the examination system of the ABRSM. This is an internationally recognised exam system and lets you present yourself as a candidate when and where you want. The examiner is never known to you, and they are specially trained to be objective and fair. The mean variation in marks between any two examiners is about 1%!! Fiona plays the violin/fiddle, accordion, piano, guitar and sings in a choir. She’s really drawn to the whole celtic music scene… we think that the holidays in Shetland and living in Asturias may have something to do with this! She’s busy filling the walls of her bedroom with ABRSM diplomas, and loves her violin lessons with Jantien Kassies, a colleague of ours from the orchestra. She also studies the accordion at the traditional music school in Gijón. 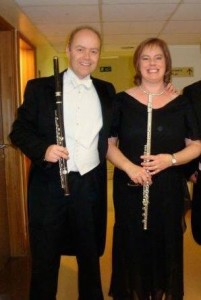 One thing we really miss in Spain is the access for all young music students (not just the conservatory students) to good youth orchestras and bands through the public school system. Myra, for example, had one hour of band as a daily subject all the way through high school in Minnesota, even though she was a student on the science subject track. Peter toured Europe with the school orchestra and band. The Spanish conservatory system produces some really world class musicians, but it excludes a huge public that might otherwise gain so much from the study of an instrument and the experience of playing in a band or an orchestra. Music should not be incompatible for anyone to study/combine with anything else, it should be one of the core subjects of the curriculum. There are so many published studies that show that playing a musical instrument has profoundly beneficial effects on brain development, and improves test scores in maths and languages. The audiences of tomorrow are likely to be more sympathetic toward classical music if they have played an instrument or sung in choirs themselves. It seems crazy to remove this important learning tool from schools!

If you’re a student who aspires to play in an orchestra, don’t spend ALL your time learning the latest concerto or memorising all the De Lorenzo studies! Learn the repertoire, listen to the music that you’re likely to play. To play as an extra, you will need to learn to be very flexible in terms of pitch, colour, and dynamics. It’s amazing how often we’ve heard someone whose sound and pitch go completely out of control once they have to play a true pianissimo in a wind section chord. Learn to play super ppp, and still maintain a good harmonic content in your sound, and BE FLEXIBLE.

Sing with your own voice. Nobody will pay to hear a copy of a famous flute player. If you’re always listening to this flute player or that flute player you’ll end up with just one concept of sound and phrasing, which makes you an inflexible player! You have to listen to the lesser known but equally good players that are around now and in years past, and you have to listen to other instruments. If you play Cesar Franck, do you listen to a recording by a flute player, or a violin, or a cello? Remember that Marcel Moyse wrote a whole treatise on sound and expression based on his experiences in the opera house.

Finally, it’s traditional to complain about everything in the musical world, but in today’s financial climate we all know lots of people who’ve lost their jobs in a thousand different careers. Our own lives are centred around the OSPA, which has had some financial problems over the last 25 years…like every other orchestra. We think that the really important thing is to remain open to new ideas, and to be prepared to move to wherever in the world the work takes you. Don’t be scared to emigrate — if you want to live in the same area as your parents or family, you should probably think about a different career! 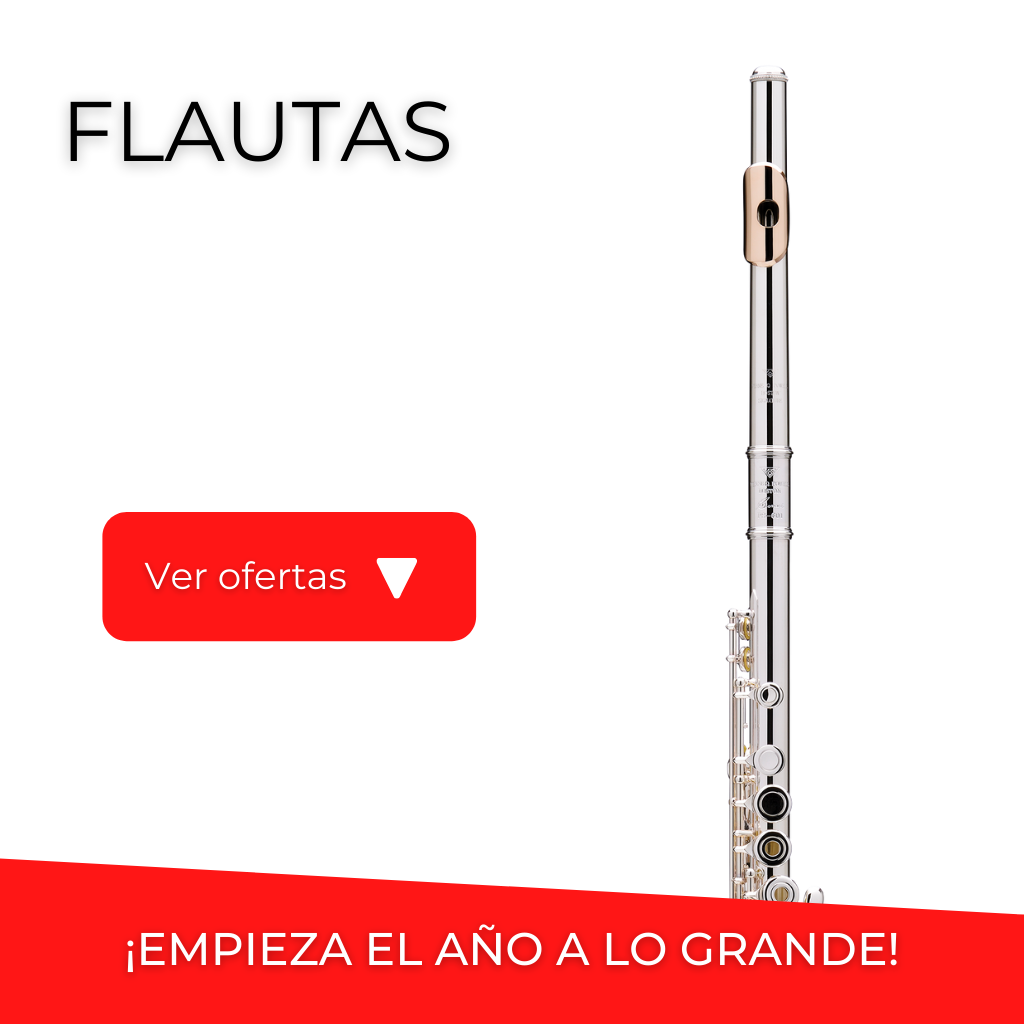