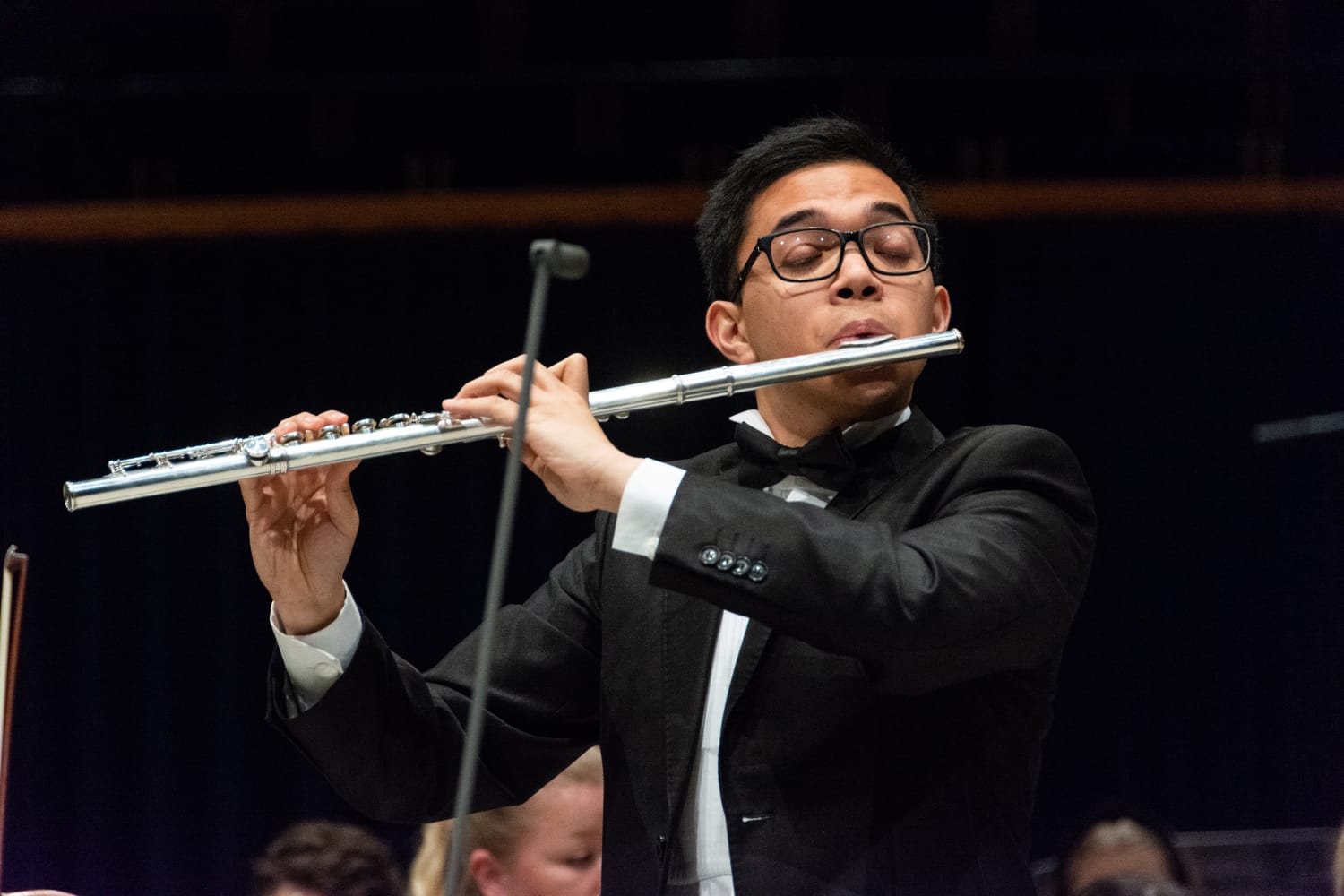 I bring you a new interview in the blog! He was awarded recently with the 3rd Prize and Best Interpretation of the New Piece by Thomas Larcher in the Carl Nielsen International Flute Competition 2019.

Without a doubt, he is a great flutist and person, as you can read in this interview. I hope you like it, and if that’s the case, share the interview with your friends! 🙂 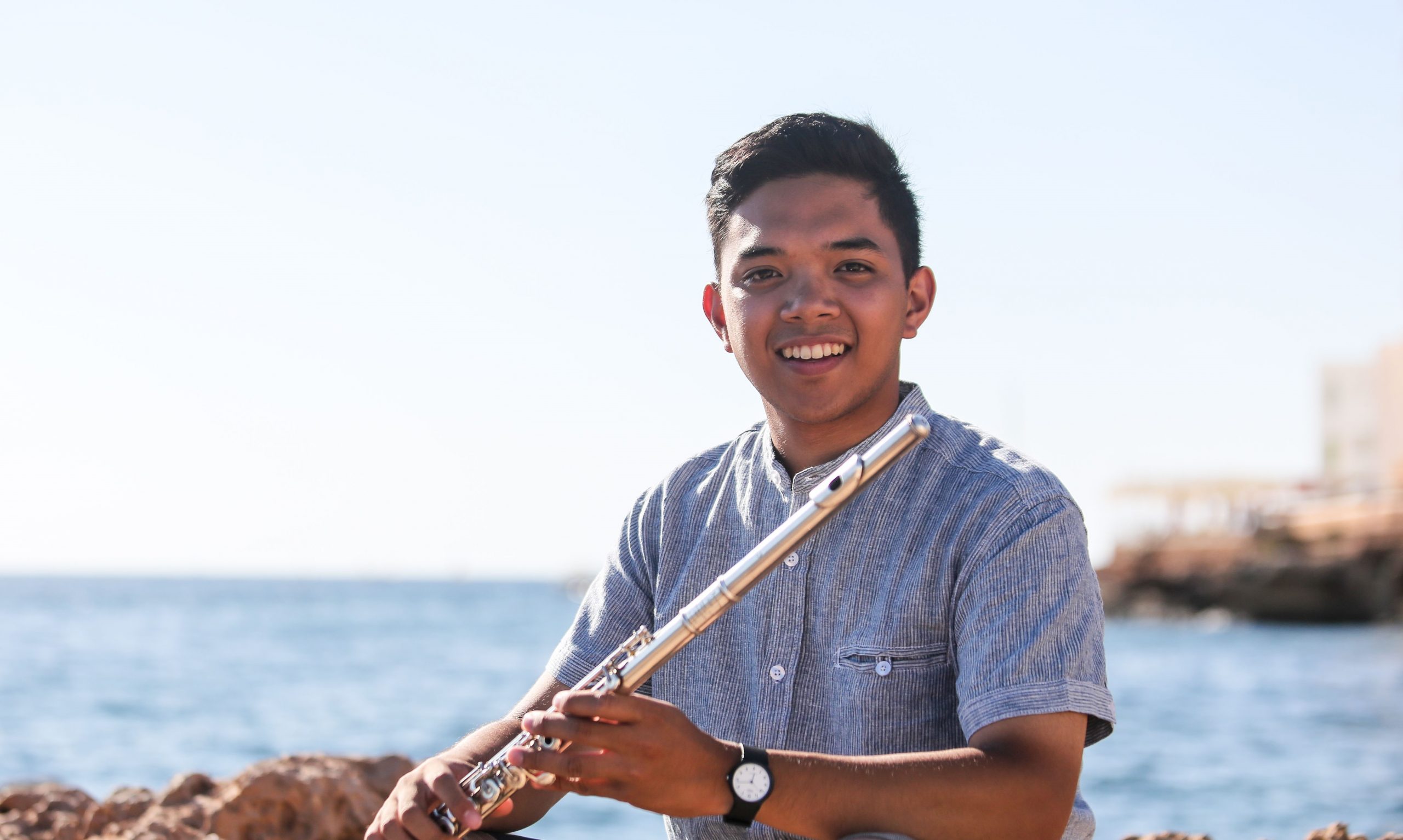 My mom used to play all kinds of music at home. I grew up in a Filipino church where every Sunday they play worship songs full of meaning and rhythm. The whole following week I was singing and humming these songs and I was looking forward to the next weekend!

Nowadays, whenever I get home, I still go on Sundays and play the flute, or sometimes the piano.

Also, in our family everyone sings for fun and we have karaoke in every family reunion. Since I was little, my mom made me sing in front of everyone and after some time I was already singing in events, weddings, Filipino parties… I even participated in singing contests!

My parents have always been music lovers and they wanted that we all study music. My sister was studying piano, so my first option was piano (together with flute and violin) as it was financially much easier for us. I ranked first at the entrance exams – that means I had priority on choosing the instrument. The day came: the director/headmaster of the Conservatory called by ranking order and the parents had to say loudly the instrument they pick. On that moment, my dad said “flute”. We both looked at each other, we didn’t understand anything. When he realized it, he had to wait until the end so he could speak with the headmaster. It was too late, changing my instrument would mean going back to the beginning and repeating the process. I remember how annoyed was my dad while my mom was telling him the following day: “tell me, where do we get the money to buy a flute?” We were lucky to find a second-hand flute and I could bring it to my first flute lesson the following week.

I started playing the flute at the age of 8 at the Ibiza Conservatory. I remember, after the 4th year exam, my teacher Joana Moragues motivated me to apply for different national competitions and to really go for it. Travelling to different cities, preparing new repertoire and getting to meet new people was fun! It might sound strange, but I must say I met many of my closest flute friends in competitions.

By this time, I started playing solo concertos with different ensembles from the Conservatory, with Banda de Música de Sant Antoni de Portmany (wind ensemble of the town where I grew up), and with the Youth Orchestra of Ibiza under the baton of Salvador Brotons, one of the best memories I cherish. During my last years in Ibiza, I also received tips from Anikó Pusztai and I travelled often to Palma to attend masterclasses of Vicens Prats. Then, I had the the opportunity to continue my studies with Vicens Prats in ESMUC Barcelona, city where I spent 2 amazing years full of music. I was in the same Analysis and Composition class together with flamenco, jazz and baroque students, where we shared lots of opinions and my vision of music got wider. I also played with Youth Orchestras of Catalunya (JONC) and Barcelona (JOSB) and had so much fun playing chamber music at school. Currently, I am studying my last year’s Bachelor degree at the Hochschule für Musik und Theater München under the guidance of Andrea Lieberknecht and Natalie Schwaabe (piccolo) with a full scholarship given by Alexander von Humboldt Foundation. It’s beyond amazing to live in this city! At first, I came as an Erasmus student and I just loved the fact of being surrounded by many different nationalities and how open and welcoming was the atmosphere.

I’m too bad at remembering this kind of things… I have to say that not so long ago in Munich, I left my flute at home hahahaha yeah… you guys should have seen my face on my way to the music school. Thank God it was not an important concert and a friend was there, so I could borrow her flute. The thing is that it was not my first time I forgot my flute, it also happened to me twice when I was 8-9. Both times, I realized when I was at the car and so I came crying to the lesson hahahaha! I guess, after all of this, it won’t happen anymore.

I usually work every summer in a family hotel in Ibiza. During my first year I was giving out drinks and snacks with a trolley around the pools, and later I was helping at the dining hall by checking the guests that came in every meal. Already during my first year I thought of playing tunes with the flute every time I was bored and had nothing to do. Every day was actually a fun challenge, they asked me to play different songs and I walked around the guests while I was playing. 80% of the guests were English and during a dinner one asked me to play Liverpool FC Anthem “You’ll Never Walk Alone”. After playing the first notes, people stopped eating and doing what they were doing and started singing the song. I guess you all know the song, if not, please do have a look and you’ll understand. When we reached the Chorus, everyone was standing and singing their hearts out. Even people from different tables were looking and hugging themselves, they kept repeating the chorus for so many times. My co-workers and I got teary-eyed. I’ll never forget that moment, that atmosphere. It was just special.

Thank you very much! I sometimes still can’t believe it happened. I learned countless things during the whole experience and it feels so honored to have played in all rounds, in different situations, with different energy and feelings. Also, getting the chance to play with great musicians was simply amazing. From Gosha and Seungwon in the first two rounds, then Odense Symphony Orchestra and Copenhagen Phil with Anna Skryleva. I’m just so grateful, also for all the support I received before, throughout and after the competition, especially from my parents that came all the way from Ibiza and Amsterdam and stayed from the very beginning till the Prize Ceremony. For me, seeing them in every performance and how they got so emotional while I received the awards was the real prize. 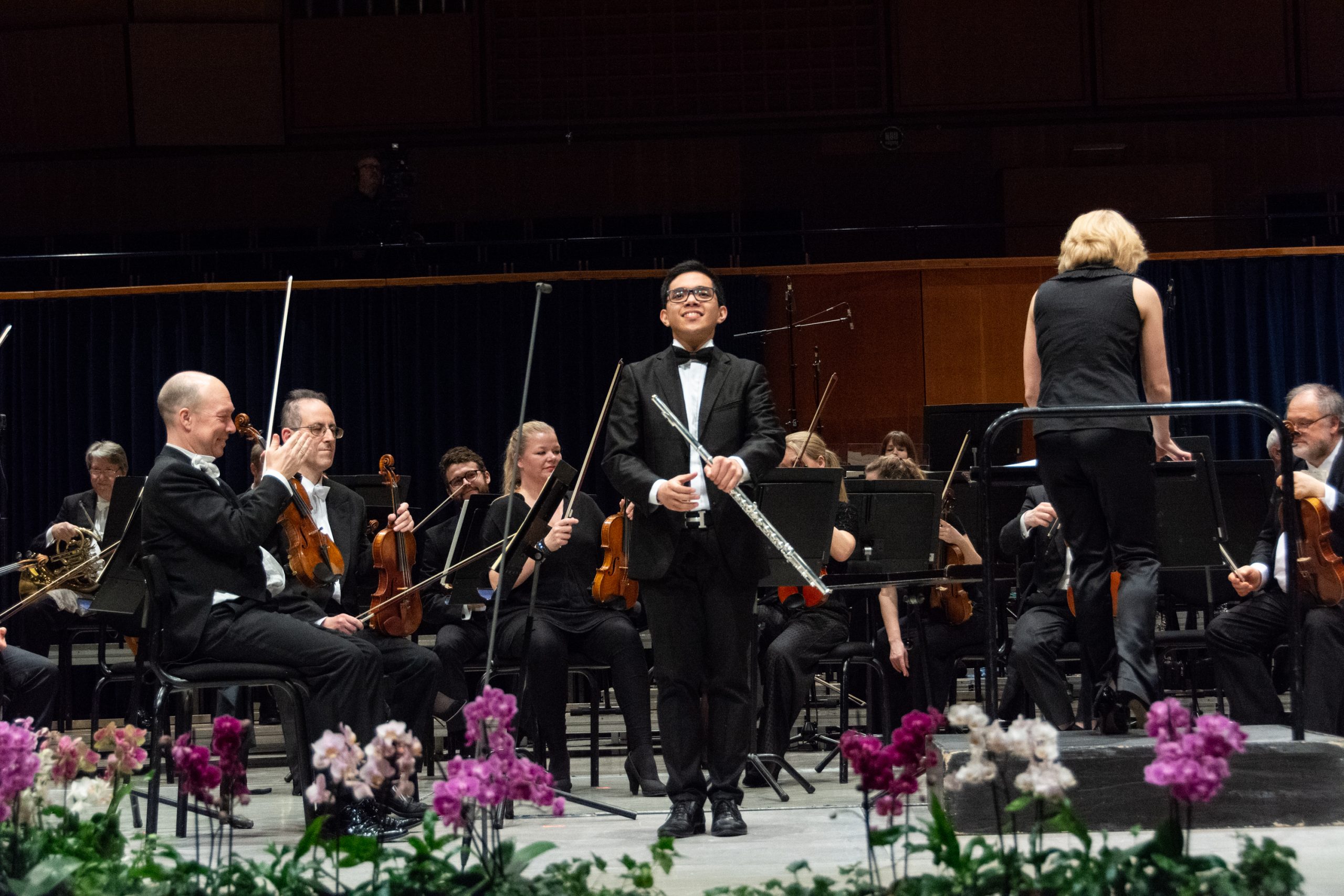 The repertoire was very demanding, with a collage/composition project and other pieces from different periods, most of them completely new to me. We received the invitation to the competition early January, and so it was two exciting months of ups and downs. Time was running out… But still, I was lucky to have the semester break right before the competition and I made the most of it to focus on the preparation. I sang while doing exercise, hummed while cooking, listened to every piece in loop while taking the tram, before sleeping, while taking a shower, and especially I visualized myself at the moment of the performance every day. All of this also helped me to memorize almost the entire program for the competition, a goal I did not expect to achieve in such a short time!

It has been a mental preparation in all aspects. My mom gave me a book entitled “How to make positive imaging work for you”. It includes many tips to follow day by day, how to visualize the problems and most importantly how to keep the image we have of ourselves in a lively and positive way (very applicable in any other field of our life). This also means keeping calm at all times, having a lot of patience and, most important, FAITH.

I also focused on the extreme side on having very clear musical ideas and being able to deliver everything I had in mind, so I could just step into the stage and enjoy. I must say I was happy with this aspect after each round!

These types of challenges also help you to organize and take advantage of time more efficiently and to know yourself more, your virtues and weaknesses, as well as how you get along under pressure.

Going for a walk, Netflix, partying, reading… Having breaks and spending time with close friends has also been part of the preparation and it made a huge difference!

Of course, my teachers in Munich have helped me a lot, Andrea Lieberknecht with every detail and how to approach every piece and Marion Treupel-Frank with the baroque repertoire. Also, my crazy friends who helped me from day zero with the collage. In this challenge, many people were behind and they are all part of this success! 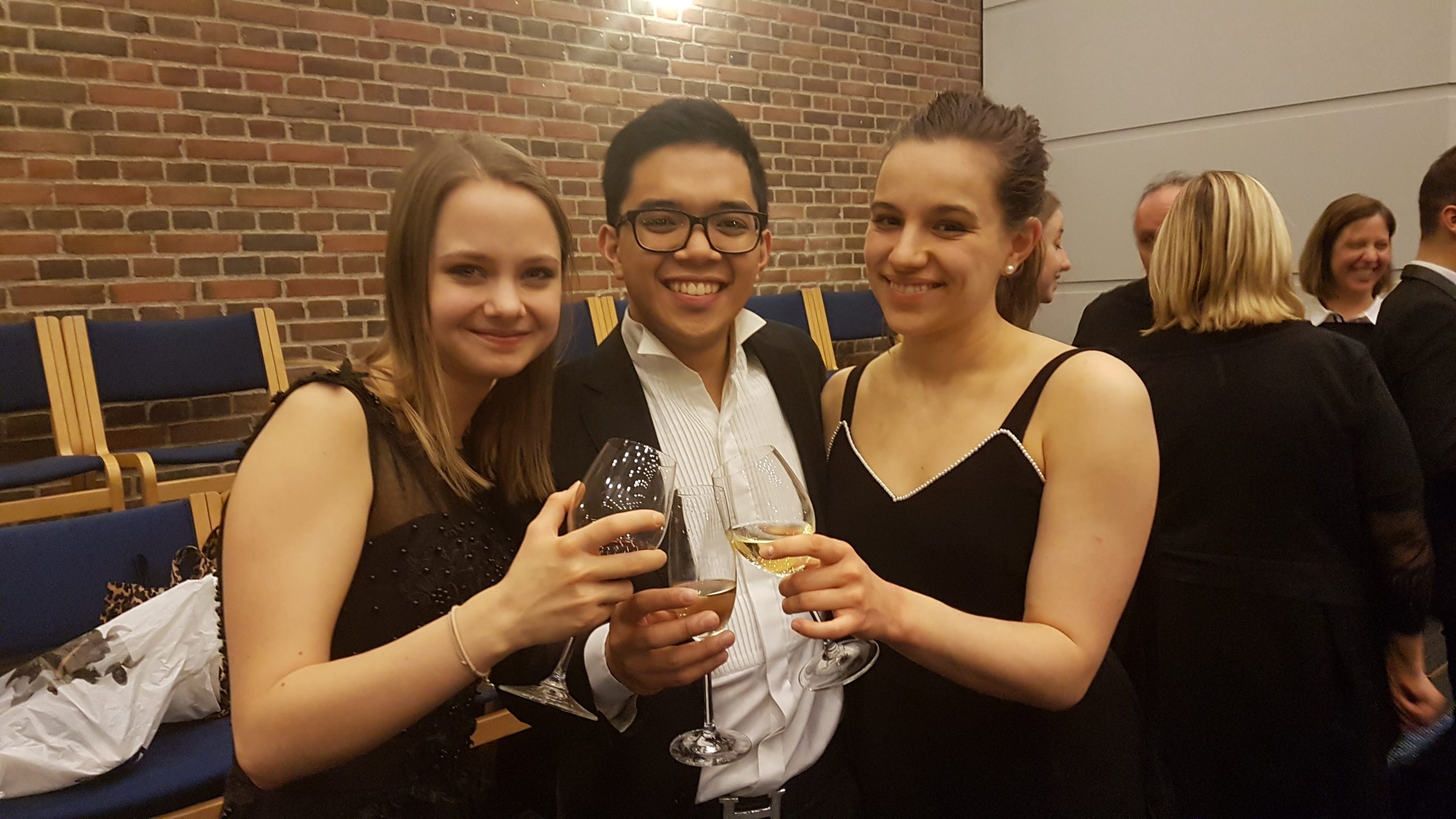 For now, I’ll keep doing and preparing myself for orchestral auditions. In Germany there are so many nice orchestral academy programs which would be nice to learn and participate!

Orchestra playing would be amazing to combine with sharing thoughts, teaching, lots of chamber music and solo concerts, creating and experimenting with another genres and arts… getting to do all of this would be a dream!

Also, with the prize I have won, I would like to take the opportunity to look for another instrument which gives me more possibilities to express myself even more freely. Let’s see!

On the other hand, I’m looking much forward to playing my Bachelor final exam on the 4th of July 6pm at the Musikhochschule in Munich. You’re all guys invited!

Everything is evolving so fast: with technology developments we are having more and more tools to create music. With a simple click, we can post something and share it and everyone can have access to it. It’s also amazing how much material is already posted on the Internet, online concerts, masterclasses, recordings.

Nevertheless, I somehow see that people get distracted and lose their track easily, and I feel like kind of lack of attitude or commitment in some situations. On a large scale, subsidies for music are being reduced, less hours for Art subjects in general schools, and so on. If we really care for this topics, I think it is our duty, as artists, to inspire everything and everyone that surrounds us and teach values such as discipline and commitment to the next generations. I believe that in few years, the situation could be completely different!

I really wouldn’t know what to say… just be grateful. Always, any time. Grab every chance, no matter how big or small it is and just put so much passion in everything you do. Without any regrets.

Something I learned through the years is to enjoy small things like waking up from a ‘siesta’, going out for beers with friends, watching the sunrise, hugging your pet, whatever you feel like doing. I think that enjoyment somehow helps to build your personality and authenticity in your way of expressing yourself, as well as being your best version, in the most natural and convincing way. Then, magic happens, and for me that is what ART is about.