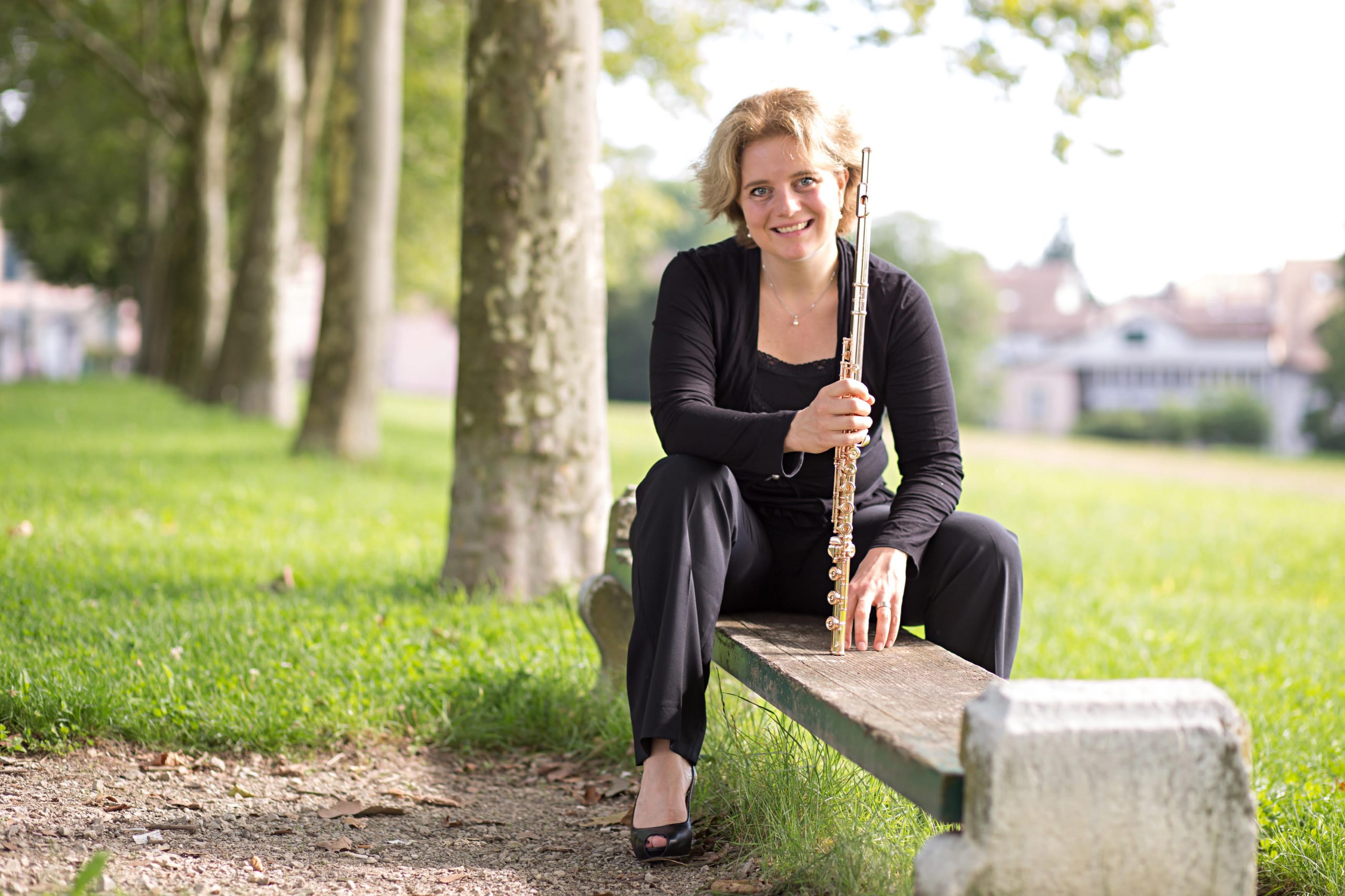 She is Sarah Rumer, solo flutist of the Orchestre de la Suisse Romande in Genève (Switzerland). A first class flutist who also teaches in the Music University Lucerne, also in Switzerland.

Maybe you didn’t know Sarah (or yes), but believe me, this interview is a magnificent opportunity to know her: she is a top flutist and she tell us a lot of really interesting things. I hope you enjoy the interview!

And remember that you can follow me on Facebook or Instagram to be updated, and you can also support this blog on Patreon. Thank you so much!

I grew up in Zurich in a family where music was omnipresent. My parents, both medical doctors, were (and are!) both enthusiastic amateur musicians; my mother used to sing in choirs when I was a child and my father played at home the piano and, in the church of our town, the organ. We sang a lot, and normally when I was going to bed it was my father’s practicing hour, so I listened almost every evening to his playing of Bach and Beethoven’s piano works, or Schubert’s “Lieder” while falling asleep. When I was five or six years old, I used to accompany my father on sunday mornings when he was replacing the ordinary organist for the mass, and turned the pages of his scores. That’s how I learned reading music: he told me to follow the bass line, which was the easiest one, and gradually I understood how music was written. Not a very academic way of solfege education…

After some years of polyvalent musical education with piano, recorder and singing, I hesitated between flute and cello, but flute was very much „in vogue“ as there was an excellent flute teacher in our district. And I remembered my chats with a very old lady in our neighborhood, who had talked to me about her son being a flutist and had shown me some of his records, which had impressed me very much. That’s how I started playing the flute, and later I realized how famous the son of my neighbour was: it was a certain Peter-Lukas Graf…

My main teachers were Felix Dorigo, to whom I owe the pleasure of music making and all the basics of flute playing and phrasing, Günter Rumpel, former Principal of the Tonhalle Zurich, who taught me preciseness and conscientiousness, and Dieter Flury, Principal of the Vienna Philharmonic, who taught me reading the music behind the text.

There are plenty of funny memories! Bumping into somebody you haven’t met for years somewhere on tour, or these moments in a rehearsal when for a reason which you even won’t remember later somebody starts laughing and you have to interrupt the music because everybody is laughing tears ;-)!

But I’d like to mention a very special thing that happened during a tour in Japan: to celebrate the diplomatic relationship between Switzerland and Japan, I was asked to play a concert featuring swiss and traditional japanese music with some orchestra colleagues, and with japanese musicians playing Koto, Shakuhachi and other traditional instruments in a “Nō”-Theatre. As the protocol of these ancient japanese theaters is very strict, we had to wear white slippers with our black concert dresses… funny enough. When we were rehearsing the japanese pieces, it turned out that we didn’t have any possibility to communicate with words, as we didn’t have a common language. The Japanese scores were illegible for us, and the Japanese musicians weren’t familiar with western music notations. After having miraculously solved some problems concerning repetitions or jumps, we managed a memorable performance. Music is stronger than any cultural gap!

I was 25 years old when I won the audition for Principal Flute in the Orchestre de la Suisse Romande. Although I knew (after some encouraging prizes at international competitions in the year before) that one of the next „big“ jobs could be mine, I didn’t expect at all to win this audition – there were over 80 participants! I still remember my inner reaction when I learned that I had reached the round of the last four: “Now you don’t have to do miracles. Just play on your level, be natural and honest with your musical proposal, and the rest is up to the jury to decide”. This gave me possibly the necessary calm. And I still remember our manager announcing the result – first I didn’t understand, because I wasn’t used to hear my family name pronounced in the french way!

I already had some orchestra experience as Principal Flute of the Opera and Philharmonic Orchestra in Graz and the Mozarteum-Orchester Salzburg, and I couldn’t have imagined a better preparation to this job that my studies with Dieter Flury, who, as Principal of the Vienna Philharmonic, could teach me every detail of the orchestra practice. Nevertheless the first years were very intense. Not only I had to learn all the repertoire; it was as well a long process to become completely familiar with the orchestra’s style, to learn how to adapt your dynamical range, how to anticipate rhythmically in order to compensate distance in orchestra playing, to know when and how to lead the section…etc.

I’m very thankful to my colleagues and our former music director for all the support they gave me on my way to become the musician I am today. And I am very happy that our orchestra is today with marvelous colleagues in all sections in perfect shape for wonderful music making with our director Jonathan Nott! Being part of an orchestra with an important history, with such various activities as playing opera and symphonic repertoire, recording and touring, is still a huge source of inspiration.

Auditioning is quite a strange „sport“ where we basically don’t need any different qualities than in our future orchestra musician’s life, but we need to use them in a very specific way, especially the dealing with stress and concentration. There might be some extraordinary and lucky talents who win their first audition, but this is exceptional. For all the others, experience will help you to get better. If you want to progress in swimming, go swimming; if you want to progress in auditioning, go auditioning. If it’s really our dream to be member of an orchestra, we need to widen our horizon, to consider leaving our country or even our continent. The more candidatures you send, the more invitations you’ll get; the more auditions you’ll do, the less pressure you will have on the specific one, the more experience you’ll get and the more you will have immersed in the audition repertoire. Because preparation is everything. Usually the people winning an audition are ready weeks before and spend the last days only doing run-throughs, presenting their program for different people in different circumstances; you could wake them up at 3am and make them play Peter and the Wolf backwards and it would work. But it’s not only about the instrumental preparation: young musicians might underestimate how well one can hear in an audition whether they only now the flute part of the required passage or the whole formal and harmonic context, the other voices, or for an opera, the plot. An important part of preparation takes place without the flute. It’s about general music culture, reading scores, listening different interpretations… This musical and instrumental mastery creates the excellence you need to win an audition.

Very often I feel that because of the anonymity behind the curtain and the tendency to get rather technical feedbacks, or critics on small details, young musicians feel kind of artistically paralysed and think only about perfection. It can be helpful to actively remember that a jury is looking for a colleague who will inspire them and who will fit into their group. So play all the aces you hold! If you know that you can seduce your public with beautiful pianissimos or that people love your energy, use it. Dare colors, dare deliberate proposals of phrasings, dare surprises. The second point is more delicate: you can try by listening to recordings of an orchestra to find out what might please them. But to be authentic in your musical proposal, it’s better not to deny your personality or educational background.

And last but not least: we need to relativise our perception of failure. Not winning an audition doesn’t mean that you didn’t play well or that you’re a bad musician. It just means that somebody else was chosen. We can’t deny our frustration, but we shouldn’t let us discourage. It’s all about statistics: if at every audition 30 people play, it will normally take 30 auditions to win a job. And this leads us back to the very first point: go auditioning!

I feel happy that, after 8 years of teaching at the Lucerne Music University, all of my ancient students work with music. Some of them are teachers, others orchestra musicians, music managers, freelancers…one even became jazz flutist. It’s very important for me to show them from the very beginning that there are plenty of ways to have a fulfilled musician’s life – although conditions aren’t easy. In the last decades our profession changed a lot (as did plenty of other professions!), and nowadays those who can re-invent it following their very individual potential will succeed. My responsibility in their education is to convey them the instrumental handcraft, to sensibilise them for stylistic issues, to help them building their musical thinking and growing their artistic personality. It’s not a coincidence that, with my background as native swiss german playing now in a international, but stylistically french-orientated orchestra, I feel committed to the idea of so called “french sound” culture. But in the same time, my musical conception is very much orientated to the central european and german approach, not repertoire-wise, but in my way of considering harmony for phrasing. I try to transmit these values, and to support my students to become versatile, flexible, open-minded musicians with strong ideas and an optimistic attitude.

The musical level, throughout all countries, is incredibly high. Probably there aren’t more really outstanding, exceptional musical personalities than before, but the average level got better and better. And never before the cultural offer and availability has been as rich as today. This is enjoyable, but means that there is a lot of concurrence – either to find one’s place in the cultural landscape, or to find the public we want for our musical message. The financial difficulties of many countries don’t help at all. While in some Asian countries the market highly demands classical music, in Europe classical music is struggling to get rid of its image as old-fashioned, elitist, inaccessible. All these institutions working on opening their doors and democratizing classical music do fantastic and indispensable work. If they manage not only to reduce classical music to small bits, being as easy to understand as pop songs and not longer than a youtube clip, but showing to this public the incredible richness of expression in classical music, which covers actually all the emotional range of human life, we will manage the turnaround. On stage, or when we play in a hospital or for children or in the hall of a train station, our mission is more than ever to have a musical message that is strong enough to touch people. If people are touched, they’ll be different, even better human beings after the concert than before, and that’s how we can have impact on society and be essential for it.

Be hardworking: try everything to get your instrumental and musical foundations as early as possible.

Be patient: success sometimes likes making us yo wait.

Be creative: as an artist willing to find your public, you’ll need to go new ways!

Juan Val - 28/04/2019 0
I bring you a new interview in the blog! He was awarded recently with the 3rd Prize and Best Interpretation of the New Piece...